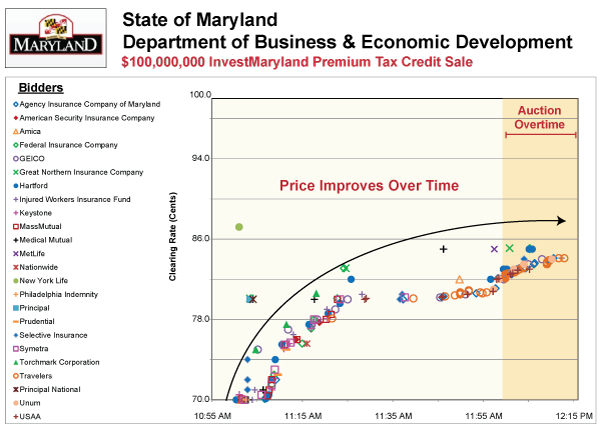 Governor Martin O’Malley and Peter Greenleaf, chairman of the Maryland Venture Fund Authority, today announced that $84 million has been raised for Maryland’s Innovation Economy through InvestMaryland – an historic initiative created by the Governor and passed by the General Assembly last year to invest in the State’s promising start-up and early stage companies. The $84 million raised far exceeds a goal of $70 million and was generated through an online auction of premium tax credits to insurance companies with operations in Maryland. While other states have sold tax credits to fund similar venture capital initiatives, Maryland is the first state to use an online auction to raise the capital for such a program. The inaugural round of investments will be made in innovative companies this summer through several private venture capital firms and the State’s successful Maryland Venture Fund (MVF).

“Today, we are pleased to announce that Maryland has taken a significant step forward in generating capital for our businesses and creating jobs,” said Governor O’Malley. “For the first time in our nation’s history, a state has successfully held an online auction to raise funds for a venture capital program and as a result, Maryland will infuse $84 million in venture capital into our Innovation Economy to create jobs. Our State is well-positioned to be a leader in the new economy as a global hub of innovation – a leader in science, security, health, discovery and information technology. That’s why last year, together with business leaders from across the State and the General Assembly, we chose to invest in our diverse and highly-educated workforce and the skills and talents of our people for the jobs and opportunity of tomorrow.”

InvestMaryland is the largest venture capital investment in history by the State. The program is being implemented through the Venture Fund Authority and the Maryland Department of Business and Economic Development (DBED).

“I am thrilled with the auction’s success in not only raising $84 million for InvestMaryland in this difficult economic environment, but also by far exceeding our $70 million goal. I’d like to thank our many partners in this effort – Grant Street Group, DBED staff, my colleagues on the Maryland Venture Fund Authority and the participating insurance companies for helping to make this auction a success,” said Greenleaf, who is also President of Gaithersburg-based MedImmune. “I now look forward to putting this capital to work by making initial investments this summer to help build new businesses and create jobs in Maryland.”

“Working together with our stakeholders and insurance companies, we were able to raise $84 million and far exceed our goal to fuel innovation and entrepreneurship in Maryland,” said Maryland Department of Business and Economic Development (DBED) Secretary Christian S. Johansson. “This program brings maximum benefit for taxpayers, helps create the jobs and companies of tomorrow and builds an economic climate where the most promising ideas and innovations have a chance to mature.”

“GEICO is pleased to work with the State on the InvestMaryland program and participate in today’s successful tax credit auction,” said Mike Campbell, Chief Financial Officer of Maryland-based GEICO. “Our company is in full support of the positive impact that InvestMaryland will have on companies throughout Maryland in terms of job creation, stimulating private investment and moving our Innovation Economy forward.”

Key tenets of InvestMaryland, Governor O’Malley’s signature economic development proposal last year, have been implemented over the past nine months. In August, the Governor named the Venture Fund Authority, a nine-member panel that oversees the administration and operation of the program. Earlier this year, the Authority selected Grant Street Group to prepare for and run the tax credit auction and also recently selected Altius Associates, a London-based firm, to oversee the selection of three to four private venture firms to invest the InvestMaryland funds.

The private venture firms will be responsible for investing two-thirds of the funds, which will return 100 percent of the principal and 80 percent of the profits to the State’s general fund. The remaining 33 percent will be invested by 17-year-old Maryland Venture Fund (MVF). Over its life, the MVF has invested $25 million into hundreds of start-up and early stage technology and life sciences companies, generating a $61 million return, 2,000 jobs and more than $1 billion in private investment. The Maryland Small Business Development Financing Authority (MSBDFA) will also receive a portion of funds for investment. Returns on the funds invested through the MVF will be reinvested in the program.

Among its benefits, InvestMaryland has the potential to create thousands of jobs in Innovation Economy sectors – life sciences and biotechnology, cyber security/IT and clean/green tech and attract billions of follow on capital. It mirrors many aspects of a federal program to accelerate high-growth entrepreneurship nationwide, The Startup America Partnership, which President Barack Obama launched year.

The program is one of a number of initiatives Governor O’Malley has introduced to spur innovation and entrepreneurship in Maryland. Earlier this year, the Governor announced a legislative proposal to create the Maryland Innovation Initiative, an historic partnership between the State and its research universities to advance cutting-edge research to the commercial marketplace.

Maryland has an outstanding infrastructure to support an Innovation Economy. The Milken Institute ranks Maryland #2 in the nation for technology and science assets. According to study results, while Maryland received high rankings in human capital investment, research and development inputs, technology and science workforce, and technology concentration and dynamism, it lagged behind other states in risk capital and entrepreneurial infrastructure, demonstrating the need for InvestMaryland and other programs. The Index provides measurements of the technology and science assets for states, ranking them on their ability to foster and sustain a technology sector, which research has shown is a crucial factor in determining a region’s future economic success.