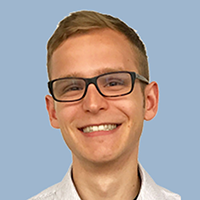 What have you been working on this summer?

Over the course of my internship, I worked with the Application Services team to deliver a service that tracks latency for any of Grant Street Group’s apps. The metrics collected by my service enables Production Support to understand the root cause of slowness in an app. A goal was to ensure that any developer could get up and running with my service at low cost, so I enlisted the feedback of several teams during the design process. The end result was an intuitive API suited for the needs of the developers at Grant Street Group.

What about outside of work?

I’m a functional programming nerd, and this summer I’ve been working through Chris Okasaki’s book, Purely Functional Data Structures. I’ve been doing the exercises in OCaml, a language which encourages a paradigm that is occasionally awfully harmonious with Perl, despite what some zealots on the internet may allege.

What personal or professional accomplishments are you most proud of?

The times I’ve been proudest have been when others were helped to success by my hard work. In high school, I found this when supporting the theatre troupe by playing piano in the pit orchestra. In college, I’ve found this by mentoring high school students to carry out a project to completion. Last spring, they programmed robots to play tag!

How would you describe Grant Street Group’s company culture and work environment?

In a word, adaptive. Teams play to their members’ strengths, so everyone is able to do what they do best while fitting into the bigger picture.

How has your Grant Street Group internship helped prepare you for your career?

As a developer intern, I’ve been introduced to a host of technologies, like Docker and Elasticsearch, that I’ve had to pick up on the fly. Software engineers have to be at home with “on the fly,” so this exposure has been invaluable to me.

Learn More About Our Internships