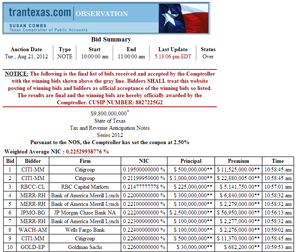 Pittsburgh, PA (August 21, 2012)  — On August 21, 2012, the State of Texas successfully hosted its 9th annual Tax and Revenue Anticipation Notes (TRAN) sale with Grant Street Group. During an hour-long auction on a platform designed by Grant Street Group (www.TRANTexas.com), the State sold its $9.8 Billion TRAN and secured its lowest interest rate ever for the one-year notes: 0.225%.

Following the sale, Texas Comptroller Susan Combs said “We will save valuable taxpayer dollars because of this record low borrowing cost,” Combs said. “Buyers bid about $24 billion, about two-and-a-half times the amount offered for sale, helping drive the interest rate down to its historic low. This strong sale showed that investors are very confident in the state’s economic growth and our record of conservative spending practices.”

During the auction, 16 competing banks submitted a total of 79 bids. 23 bids were “in the money” (at or below the awarded rate of 0.225%). Complete auction results are available on the TRANTexas site:https://www.trantexas.com/pma/results/Texas.TRAN.2012/bid_summary.html