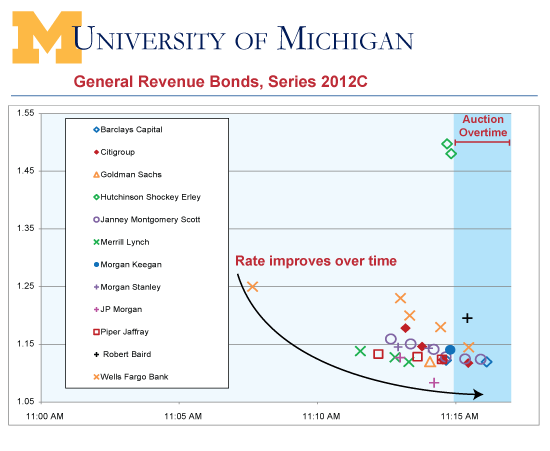 Pittsburgh, PA (March 21, 2012)  — On Tuesday, March 20, 2012, the Board of Regents of the University of Michigan successfully sold $89,520,000 of General Revenue Bonds on a competitive basis using Grant Street Group’s MuniAuction®platform. MuniAuction provides a unique online open auction format that saved the University at least $155,000 in bond interest costs alone.

“This is the second time Grant Street’s open auction process has lowered the University’s borrowing costs. This type of technology platform provides significant savings to higher education institutions, which is attractive in light of the financial pressures we face today,” said Rowan Miranda, Associate Vice President for Finance at the University.

During the auction, 12 competing underwriters submitted a total of 32 bids. Using MuniAuction’s proprietary open auction process, each time an underwriter submitted a bid, it and all other underwriters who had previously bid instantaneously learned their rank. Underwriters then had the option to either hold or improve their bid (i.e., lower their True Interest Cost, or “TIC”) in an effort to win the Bonds.

The auction was extended twice as the leading bid changed during the last two minutes of the auction. Six total bids came in during the auction overtime, including the winning bid. In the end, JP Morgan won the Bonds by improving, then submitting the bid with the lowest TIC of 1.083456%.

A replay of the University of Michigan auction is available at the following link:http://tinyurl.com/U-MI-2012Sale.